Women's Reasons for Desiring to Vote 1880

***Note from Gena:  I think it's important to look at present-day events in historical context. I'm humbled when I remember that my maternal grandmother lived during a time when women were denied the right to vote.

My good friend J. D. Thomas at Words From Us asked me to participate in posting the words of women in 1880 who answered Matilda Joslyn Gage's question about why they wanted to vote. These are women who desperately wanted a right that many of us take for granted today.

"In July 1880, Matilda Joslyn Gage, the owner and editor of the pro-woman suffrage newspaper,  The National Citizen and Ballot Box, compiled a massive list of notes from women all over the country who sent in postcards with notes on why they wanted to vote.  These were in response to the Anti-Suffrage position that real women don't really WANT to vote" (and yes, there were women who were part of that group).

"Some of these notes are very touching and sad when you realize how many of them never lived to see the day when every woman in the country could cast a vote in federal elections forty years later."

Please take some time to read these and remember that you may feel like you have a choice to not vote in this election but several generations ago women had no choice.


A Few Extracts from Postals and Letters.

The work of reading these thousands of postals and letters and selecting from among them for publication, has required the labor of two persons over two weeks, and a portion of this time three persons were engaged upon it. Although but comparatively a small portion of them has been given, they form a very remarkable, unique, instructive and valuable addition to the literature and history of woman suffrage.

They not only show the growth of liberty in the hearts of women, but they point out the causes of this growth. Each letter, each postal, carries its own tale of tyrannous oppression, and each woman who reads, will find her courage and her convictions strengthened. Let every woman who receives this paper religiously preserve it for future reference. Let those who say that women do not want to vote, look at the unanimity with which women in each and every state, declare that they do wish to vote,—that they are oppressed because they cannot vote—that they deem themselves capable of making the laws by which they are governed, and of ruling themselves in every way.

These letters are warm from the heart, but they tell tales of injustice and wrong that chill the reader's blood. They show a growing tendency among women to right their own wrongs, as women have ofttimes in ages before chosen their own ways to do. Greece with its tales of Medea and Clytemnestra; Rome and the remembrance of Tofania and her famous water; southern France of more modern times all carry warning to legal domestic tyrants. 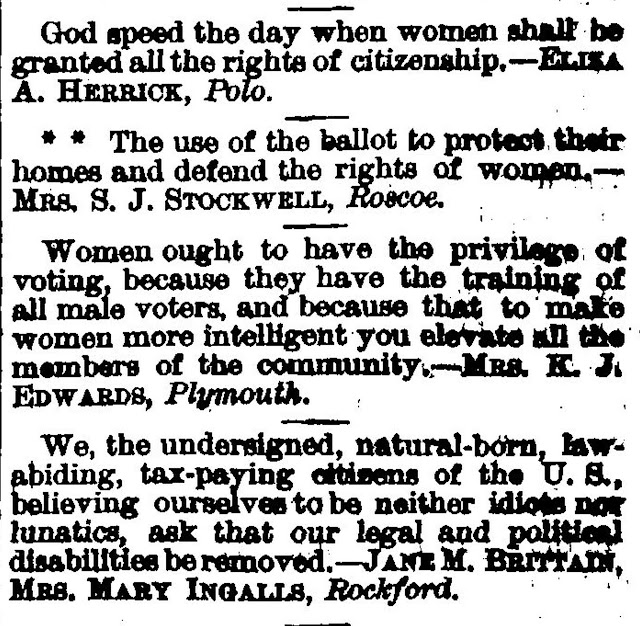 UTAH
That Territory where women vote but do not hold office, is in hearty sympathy with the work of the N. W. S. A.

N. W. S. A.: I not only desire to vote as do the women of Utah, but to receive the benefits that are usually considered the direct result of the ballot, as the women of Utah do not.—E. Lee, Beaver City.

I believe that women should vote and have equal rights in every sense of the word. In Utah women can vote men into office, but cannot vote for women. We tried to elect a trustee for common schools and failed.—Eliza Foscue, Beaver City.

I wish to cast my vote with the free and liberal women of the United States.—Harriet Broadbent, Kanab.

I firmly believe or hope sincerely when the balance of power is in woman's hands, the sins of immorality will be visited with condign punishment every time on the heads of men instead of women.—Mrs. E. S. Coombs.

I believe in the right of franchise, also equal rights in the fullest sense, for woman. —Mrs. Mary Black, Beaver City.

Officers and members of Relief Society of Mt. Carmel, Kane Co., Utah Territory, thirty-one in number, send their names desiring an amendment to the constitution, giving women the right to vote.

Oregon sent many demands for suffrage and many postals addresed to the Republican, Greenback and Democratic Conventions; demanding a woman suffrage plank of each of this conventions. Union sent fifty names to this demand. “We ask the ballot.” Lack of room compels the emisaion of these names as well as of many hundred others. An old lady of Union sent the following:
I send you the name of Mrs. Pruda Davis aged 87, asking for the enfranchisement of women.—M. P. Ames.

I am in favor of equal rights and I also wish to vote. —Annie M. Mastha. La Foye .